Tonight the moon came up, it was nearly full Way down here on earth, I could feel its pull The weight of gravity, or just the lure of light Made me want to leave my only home tonight Now I'm just wondering how we know where we belong Is it in a photograph or a dashboard poet's song? Will I have missed my chance to right some ancient wrong? Should I find myself between here and gone ... Now I could grab my keys and peel out in my truck With every saint on board bringing me their luck I could drive too fast

Tonight the moon came up, it was nearly full Way down here on Earth, I could feel it's pull The weight of gravity, or just the lure of light Made me want to leave my only home tonight I'm just wondering how we know where we belong Is it in a photograph, or a dasboard's poet's song Will I have missed my chance to right some ancient wrong Should I find myself between here and gone Now I could grab my keys, peel out my truck With every cent on board bringing me their luck I could drive too fast like a midnight sleeve As if there was a way to outrun the grief I'm just wondering how we know where we belong In a song that's left behind, in a dream I couldn't wake from Could I have felt the brush of a sould that's passing on Somewhere in between here and gone Up above me Wayward angels A blur of wings and grace One for courage One for safety One for 'just in case' I thought a light went out, but now a candle shines I thought my tears wouldn't stop, then I dried my eyes And after all of this, the truth that holds me here Is that this emptyness is something not to fear Yeah, I keep wondering how we know where we belong After all the journeys made and the journeys yet to come When I feel like giving up instead of going on Somewhere in between... Yeah, I'm just wondering how we know where we belong Is it in the arc of the moon leaving shadows on the lawn In the path of fireflies and a single bird at dawn Singing in between here and gone

Kieran Goss is joined on the stage of The Grand Opera House, Belfast, by the wonderful Beth Nielsen Chapman for a performance of her torch song 'Sand and Water'. Taken from the DVD 'Kieran Goss - Live at Belfast Opera House'. Available now from www.kierangoss.com (also see www.facebook.com/kierangoss)

This singer lost her husband, suffered breast cancer and after this had a brain tumor. Now fully recovered found her life again.

Saudade Is a word for a feeling of nostalgic longing for something or Someone that one was fond of and which is lost. It often carries a fatalist tone and a repressed knowledge That the object of longing may never return. Saudade differs from nostalgia in that whereas nostalgia Involves a mixed happy and sad feeling for the lost Memories, saudade, involves the hope that what is being Longed for might return. Saudade has been described as a " vague and constant Desire for something that does not and probably cannot Exist... a turning towards the past or towards the future. A stronger form of saudade may be felt towards people And things whose whereabouts are unknown, such as a Lost lover, or a family member who has gone missing. Saudade was once described as " the love that remains " Or " the love that stays " after someone is gone. Saudade is the recollection of feelings, experiences, Places or events that once brought excitment, pleasure, Well - being, which now triggers the senses and makes One live again.

Sarah McLachlan: I will remember you.

DISCLAIMER: I DO NOT own any audio or images in this video. All third party content belongs to their rightful owners. This video is made for entertainment purposes only. Rate, Comment :)

I do not own anything.

Another example of flying in the B-25 without the use of music on every scene!

This song reminds me of a lot of things from the past.

Spend all your time waiting For that second chance, For a break that would make it okay. There's always some reason To feel not good enough, And it's hard, at the end of the day. I need some distraction, Oh, beautiful release. Memories seep from my veins. Let me be empty, Oh, and weightless, And maybe I'll find some peace tonight. [Chorus] In the arms of the angel,

Jessica Andrews - you will never be forgotten 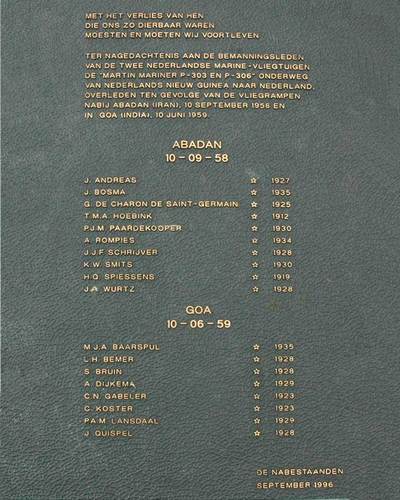 SERVED WITH HONOR PBM Seaplanes and their battles: OVERVIEW The seaplane was a valiant weapon system throughout many conflicts in World War II and in Korea. Then it became a victim of advanced technology. The Korean War was the seaplane’s last hurrah! PBM as a Weapon System DESCRIPTION HISTORY MISSION SYSTEMS KOREA DEMISE Description of the PBM High wing monoplane – seaworthy Multi-engine – R2800 Pratt Whitney Water or Land based – Tender required Range –3200 miles, Speed – 205 mph (max) Service Ceiling – 18,500 feet Weight loaded – 60,00 lbs + History of the PBM Early History of the Seaplane Flying boat history began on January 10, 1912 when a Curtis flying boat capable of carrying two passengers took off and landed on the surface of the San Diego bay. Aviation pioneers such as Burgess Sperry, Wright, Coffny, Loening, Hall, Douglas, Boeing, Sikorsky, and Martin were among those that joined the parade. In May 1919 a US Navy flying boat, the NC-4, made history by becoming the first aircraft to fly across the Atlantic Ocean. History of the PBM The PBM was originally known as the Martin 162.62. It’s design was first submitted to the United States Navy in 1936. Much less famous than the Consolidated Vultee PBY Catalina and produced in smaller numbers, it was in fact considerably more advanced in its design, and significantly larger, than the Consolidated aircraft. History of the PBM The ‘Mariner’, as it was eventually known, was all metal in construction, with a deep fuselage, a gull wing and twin tail fins. Wing and power loadings were very high. The first prototype – a quarter-scale 162 flew in 1937. The full- scale prototype, the XPBM-1, first flew in February 1939. PBM-1 initial model. PBM-3B British Mariner GR.Mk 1 with fixed stabilizing floats and greater power. PBM-3C improved 3B with armor protection and revised armament including a 4,000-lb bomb load. PBM-3D greater power and provision for an 8,000 lb  war load including torpedoes. PBM-3R unarmed transport for 50 passengers or freight. PBM-3S anti submarine model. PBM-5 2,100-hp Pratt & Whitney R2800-34 Double Wasp radials. PBM-5A amphibian version with retractable tricycle landing gear. PBM-5E radar carrying conversion. PBM-5G SAR model. PBM-5S anti submarine model. The initial production version, the PBM-1, entered service with the US Navy in 1940. This version had stabilizing floats which retracted inward towards the wings. The PBM-2 never went into production. The PBM-3 had an increased fuel capacity and armament, and a crew of nine instead of the seven on the PBM-1. The Initial fifty were completed as unarmed PBM-3R transports. In September 1942 production of the PBM-3C began. This version had three power-operated turrets, each with twin Browning .50 caliber machine-guns. The PBM-3C was equipped with search radar and could carry two torpedoes. The PBM-5 first flew in May 1943. It had 2,100 hp engines and increased fuel capacity. It was equipped with APS-15 search radar. The PBM-5A, was an amphibian with tricycle undercarriage and the last one into service. A total of 1,235 Mariners were delivered during WWII, and production finally ended in April 1949. Some 500 Mariners were still in service during the Korean War in 1950-1953. Systems on the PBM-5 Weapons: Bombs, mines and torpedoes 8-50 cal. Machine guns. Communications: Radio, HF, VHF, UHF, IFF Navigation: Dead reckoning, Celestial, Loran, Radio Beacons. Electronics: Radar, Magnetic Anomaly Detection (MAD), Search Light, Directional Frequency and Ranging (DIFAR) sonabouys. Mission of the PBM Anti-Submarine Patrol Search and Rescue Weather reconnaissance Surveillance VIP movements Antisubmarine Patrol Mission Directional Frequency and Ranging (DIFAR) sonabouys Magnetic Anomaly Detection (MAD) MK50 Torpedoes MK60 Mines Antisubmarine Patrol The PBM, in it’s antisubmarine role, accounted for 10 of the 29 submarine “kills” credited to patrol-plane during World War II. Among the more spectacular actions was the sinking of the German submarine that had sunk the HMS Ark Royal. During the Korean war, VP-42 was involved in an engagement that was believed to have sunk a submarine. Search and Rescue Mission Weather Reconnaissance Mission Many of the flights were over 20 hours and covered thousands of miles constantly reported the weather conditions by radio. Demise of the PBM Mariner aircraft remained in operational service until June of 1956 at which time VP-50 returned from operations in the Pacific. The last Navy flight of the Martin Mariner was made in July of 1958. The only known PBM in existence is in a museum in Tucson Arizona.

Copyright © 2022 Respectance is an IIZT production. All rights reserved.